Associate Professor in the Department of Electrical and Computer Engineering at the National University of Singapore where he also serves as the Vice Dean in the Faculty of Engineering. He received the B. Tech. degree in electronics and communication engineering from North Eastern Hill University, Shillong, India, in 1996, the M.Tech. degree in electrical engineering from the Indian Institute of Technology, Kanpur, India, in 1998, and the Ph.D. degree in electrical engineering from the Rensselaer Polytechnic Institute, Troy, NY, USA, in 2001. His research interests include IoT and cyber-physical system security, network security, and network performance evaluation. He is a recipient of the NSF CAREER award, the Tan Chin Tuan fellowship from NTU Singapore, the Japan Society for Promotion of Science fellowship, and the Leiv Eiriksson fellowship from the Research Council of Norway. Dr. Sikdar is a member of Eta Kappa Nu and Tau Beta Pi. He served as an Associate Editor for the IEEE Transactions on Communications from 2007 to 2012 and as an Associate Editor for the IEEE Transactions on Mobile Computing from 2014-2017. He received the best paper award from IEEE GLOBECOM (2007) and the IEEE Consumer Electronics Magazine (2020).
Abstract
The Internet of Things (IoT) represents a great opportunity to connect people, information, and things, which will in turn cause a paradigm shift in the way we work, interact, and think. The IoT is envisioned as the enabling technology for smart cities, power grids, health care, and control systems for critical installments and public infrastructure. This diversity, increased control and interaction of devices, and the fact that IoT systems use public networks to transfer large amounts of data make them a prime target for cyber attacks. In addition, IoT devices are usually small, low cost and have limited resources. Therefore, any protocol designed for IoT systems should not only be secure but also efficient in terms of usage of chip area, energy, storage, and processing. This presentation will start by highlighting the unique security requirements of IoT devices and the inadequacy of existing security protocols and techniques of the Internet in the context to IoT systems. Next, we will focus on security solutions for the IoT, with special focus on protection against physical and side channel attacks. In particular, we will focus on mutual authentication protocols for IoT devices based on security primitives that exploit hardware level characteristics of IoT devices. 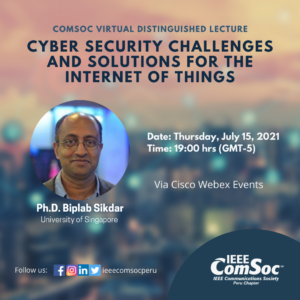